skip to main | skip to sidebar

It was the garbage cans.

Late last year journalist Cokie Roberts died.  She lived near us and I’d pass her house on the way to work.  The day the news broke I pulled slowly by the house thinking about her family inside. But what got me was the full garbage cans at the end of her long driveway.
No matter what was happening inside, in the midst of their grief somebody must have said “tomorrow is garbage day” and they filled the bins and walked them to the curb.
I feel this dissonance more than ever by a world that seems in disarray, yet I am still taking out the garbage.  Because what else are we supposed to do?

Nero is the poster child for crazy because he fiddled while Rome burned.  I don’t feel that different.

In November 2016 I walked by a tall house on a narrow street in Washington, DC.  Standing uneven on the lawn was a mud-splattered Bernie Sanders sign.  Next to it there was a taller and cleaner Hillary Clinton sign.  It was two days past the election of Donald Trump.

A young couple emerged from the house with a baby wrapped in a blanket and tucked into a stroller.  They must have been disappointed by the election.  I mean, they had lawn signs for their first and second choice candidates and they live in a city where they barely get a vote for President.  But what could they do?  So they took the baby for a walk.

People can do two things at once.  Even men.

We can go to work, to the gym, to the grocery, and do all this with a sense that there is something really wrong happening.

Because when I am walking the dogs and the sky over my head is blue and the coffee in my cup is hot, I know that there are 200 new judges in our system with whom I don’t agree, and we are on the edge of a tipping Supreme Court.  We are a country deeply in debt and riding a stock market wave that doesn’t reflect the health of our economy.  We have “allies” who don’t trust us, a Senate filled with office-holders and office-seekers, a House filled with rage, and a campaign trail to nowhere.

Although it looks fine outside my window, I know our air is not getting cleaner, our planet is not cooling, our gross domestic product is not improving.

Maybe these are just mid-life thoughts.

But they are not new.  I remember in college studying the Fall of Icarus, painted more than 450 years ago.  What struck me then, as now, is not the boy falling from the sky, it’s the other people going about their business. 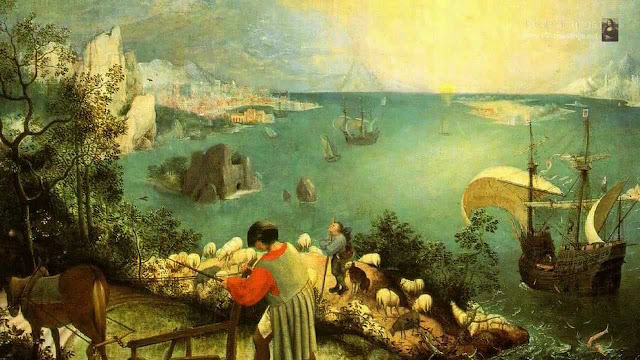 A poet said of the painting that the old Masters understood suffering takes place even while "someone else is eating or opening a window."


And sometimes we are doing both.

In the painting everyone turns away; "quite leisurely from the disaster."  The Ploughman hears the splash of the boy falling into the water, but for him "it was not an important failure."

And the "expensive delicate ship" must have seen the boy falling out of the sky, but it "had somewhere to get to and sailed calmly on."

But the poet doesn't know what the Ploughman was thinking as he worked the land. Maybe the ship's captain worried about his own son's ambition.  What was he supposed to do if he felt he couldn't save the falling boy?

W. H. Auden
About suffering they were never wrong,
The old Masters: how well they understood
Its human position: how it takes place
While someone else is eating or opening a window or just walking dully along;
How, when the aged are reverently, passionately waiting
For the miraculous birth, there always must be
Children who did not specially want it to happen, skating
On a pond at the edge of the wood:
They never forgot
That even the dreadful martyrdom must run its course
Anyhow in a corner, some untidy spot
Where the dogs go on with their doggy life and the torturer's horse
Scratches its innocent behind on a tree.
In Breughel's Icarus, for instance: how everything turns away
Quite leisurely from the disaster; the ploughman may
Have heard the splash, the forsaken cry,
But for him it was not an important failure; the sun shone
As it had to on the white legs disappearing into the green
Water, and the expensive delicate ship that must have seen
Something amazing, a boy falling out of the sky,
Had somewhere to get to and sailed calmly on.

Posted by Rob Granader at 7:42 AM No comments: