skip to main | skip to sidebar

When you arrive in Dubai you immediately notice not only that it's a desert, but it's deserted.  Traffic is light and everything is so huge, that it never feels busy.

The Emirates Mall and the Dubai Mall are so massive that nothing could make it feel crowded.  There are 1250 stores in one mall.  My son wanted sunglasses, we passed five sunglasses stores on the way to the bathroom.

The perfect representation of Dubai is the Mall of Emirates.  It is there that my kids could ski and tube at the indoor ski resort, while it's 95 degrees outside.  As my children played in the snow my wife and I drank coffee at the St. Moritz restaurant, complete with a video of a fire in the fireplace and the smell of burning Aspen trees, which sprayed over our heads via a fragrance pump that hung above the restaurant. 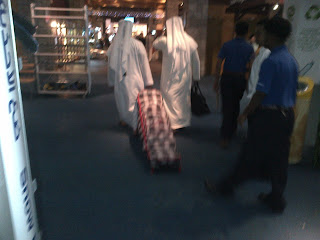 There is no recession here.  The malls are open until midnight, at 11:00 it was well-trafficked. 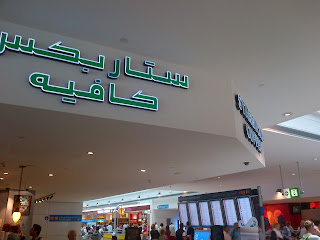 Dubai is a city of visitors.  With a population of 6 million, 4.5 million are foreigners, mostly Pakistanis, Indians and Filipinos, all looking for work.  The guests are 70% Russian.

The Barj Kalipha, the tallest building in the world has a telescope where you can find hot spots around the city and then push a button and it shows you what it looked like 20 years ago when it was a wasteland.
Vegas-Style the Dubai Mall has an aquarium and a dancing water show.

When we were told to go to the Souk, I pictured the stone alleys of Jerusalem, but instead I found a dirty street filled with Indian expats selling knock-off Hermes bags. 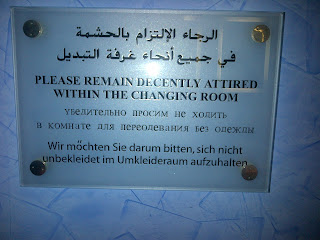 This place is a combination of DisneyLand without the charm, Vegas without the gambling or alcohol.  It's a Twinkie town.  Tastes good, but feels a bit empty.

Posted by Rob Granader at 5:52 AM No comments:

Swimming and Snooker in Sheffield

Swim meets, or Galas as they are called in the UK, are long days and sometimes long weekends.  My favorite shirt of all time was found at one of these events, worn by a tired parent.  The shirt read:  “If I only had one day to live, I’d like to spend it at a swim meet.  Because they last forever.”

But they are also rewarding watching your child stand on the blocks in front of hundreds of people and take off into the water as she stretches and challenges herself in a very public way.

Sheffield England is a town a few hours North of London and when I told members of my office I'd be going there they gave me blank stares.  Well known for its crucible steel process invented in the 1740's, it's a city on the rebound from years of decline.  Well known for its University, a soccer rivalry (the Blades and the Owls) and this weekend the World Snooker Championships.

But around the world it is best known as the maker of most of England's cutlery.

When the Holiday Inn Express dinner didn't invite we found a restaurant called Vito's which was well recommended by an online website.  We took a cab to this cozy Italian joint where the pasta is Al dente, the house wines are great and a shot of Limoncello and Grappa are gratis.

After dinner Vito came up from the kitchen in his chef top and black and white checkered pants.  We asked him how he made his way from Southern Italy to Sheffield.  He wanted to learn English and saw that all the knives he was using were made in Sheffield.  So he came there to learn English, and "Here I am 30 years later." 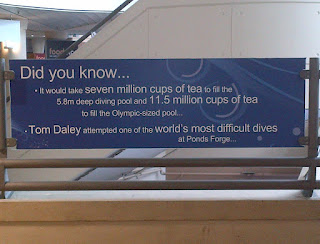 The swim meet was held at Pond's Forge.  Did you know how many cups of tea it takes to fill a pool?  This was a country-wide meet with build up that included singing and grand entrances.

The final activity before the starting gun was the singing of "Land of Hope and Glory" a song written to the tune of Pomp and Circumstance, so it already reached for the parental heart.  And then the hundreds of parents and athletes stood and sang:

Land of Hope and Glory, Mother of the Free
How shall we extol thee, who are born of thee?
Wider still and wider shall thy bounds be set,
God, who made thee mighty, make thee mightier yet, 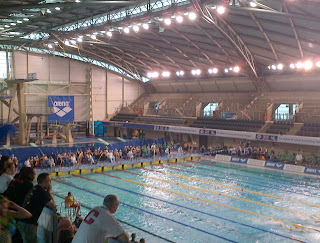 And while the song was written in 1902 at the request of King Edward, and was no doubt written about the Empire, the song had special resonance for the parents as so many of them looked down from the stands and watched their children perform.  Big burly men and bright haired women with faces painted the color of their child’s swim club shouted the words in their loudest British voices so maybe their children, and God will hear:

Email ThisBlogThis!Share to TwitterShare to FacebookShare to Pinterest
Labels: land of hope and glory, sheffield, snooker

From the Township to Jumeirah, Cape Town to Dubai

Once my wife convinced me that Dubai was "on the way back" to London I stopped showing her the Atlas. However, the distance between Cape Town and Dubai is so much more than even the 9 hour plane ride suggested.

In Cape Town we had a Seder with 200 Jews, using the same Haggadah, the same text, the same chicken soup as our ancestors back in the old country and our parents back in Florida.  Dayenu.

In Dubai people with Israeli passports are not allowed in the country and even having an Israeli stamp can cause immigration questions and delays. 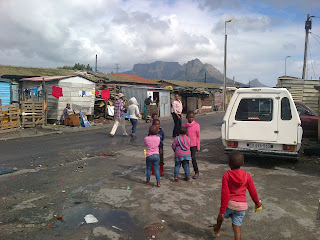 We left a country that can't house its people or give them jobs, where 70% unemployment in the township is average and 25% HIV infection is progress.  To a place where the wealth is so vast that only 10% of the population needs to work. Where three quarters of its inhabitants are foreigners who they literally had to ship in to fill the jobs. 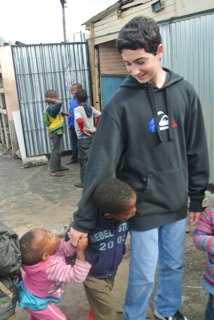 We left a place without running water, where living in a room with 16 relatives, but is on the "double story," is a high achievement, to a place where the tallest buildings in the world look futuristic, beautiful and empty. 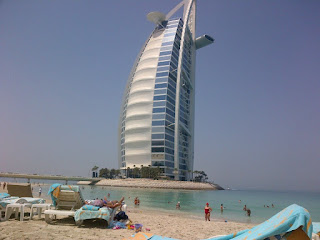 Walking through the Township our gestures feel empty when all you can offer is a pack of chips, some change, and a hug. 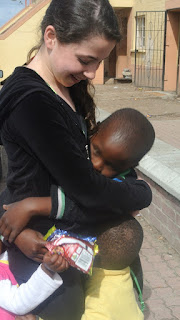 The day before we arrive a train came through town and hit four cows that had wandered onto the tracks.  When word spread men ran from their homes with machettes, hacking off what was left of the dying animals.  They came back home and thanked God for the gift of their Easter feast.

In Dubai my children donned heavy jackets and snow skied in a mall in the middle of the desert in 95 degree heat. 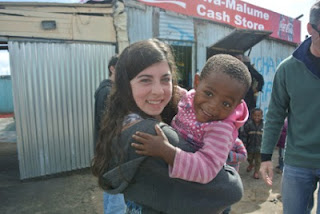 Posted by Rob Granader at 6:16 AM No comments:

My image of South Africa was molded in the Michigan diag shanty that stood in opposition to Apartheid.  It was formed in the words of "Dont Wanna Play Sun City."  It came from Bono, imploring the fans on Rattle and Hum: "Am I bugging ya?  I dont mean to bug ya."

My generation saw the end of white South Africa, the release and ascension of Mandela, the Vuvuzelas of the 2010 World Cup.

My children's first impression is formed by the baby warthogs they ask to bring home, the dazzle of Zebra that cross our path, the troop of monkeys that unlatch our door, penetrate our home and steal our apples. 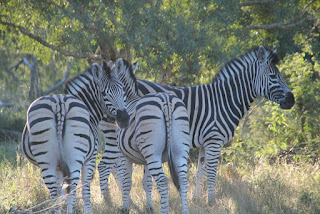 The Safari excitement comes from that edge where interest and fear meet.  The crocodile that could take your arm if he wanted to, the elephant that could flip your car with a wrong move, the road that seemed to disintegrate under your tires. The days are 6:00 AM wake up calls, a search for excitement, a peaceful afternoon, early evening rides before dinner and then zipping into our netted beds. 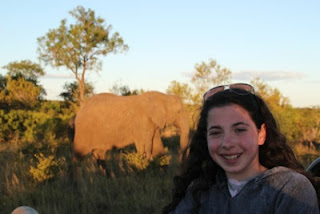 The first day you are struck by the scene, then the need to find the big 5 (Lion, Rhino, Elephant, Leopard, Hippo) and finally something more, which we got when we found a leopard in a tree with a dead nyala in its mouth and a hyena circling nearby looking for scraps.

The crushing of bones and skull in the leopard’s mouth had one child declaring her vegetarianism, like her mother 30 years earlier. This declaration only lasted until lunch, however. 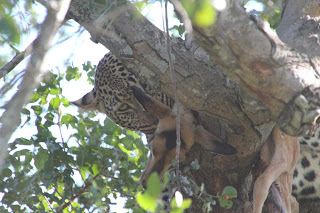 The game drives were about nature, the history of South Africa would come later.  There was some discussion of the vanishing elephants, the ivory trade, the decline of the cheetahs, the need to live as a partner with nature.  But boarding our plane out of Hoedspruit to Johannesburg history walks by when FW de Klerk comes and sits next to us with his wife and body guard.  The transition to Cape Town begins. 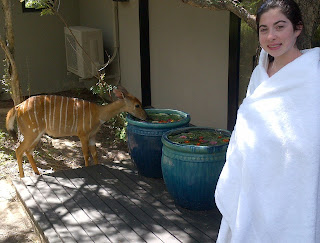 Posted by Rob Granader at 7:00 AM No comments: